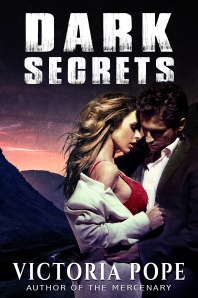 So, instead of giving little snippets here and there, I figured I’d give you the entire Prologue to whet your appetite!
Dark Secrets is available for Pre-Order on Amazon and iTunes, and will be available at Kobo and Barnes & Noble in the next few days. Don’t forget that The Mercenary is still on sale for $0.99 with checkout code AD75M at Smashwords. But do not worry because even if you’ve not read it, you’ll still enjoy its stand-alone sequel.

You can never really imagine how bad things can get.

Of course you worry about it… Did I leave the iron on? What if the airbags don’t go off? This headache must be a tumor…

There’s always that comforting thought—even if it’s buried deep inside you—that there’s probably nothing to worry about. And when you can breathe that sigh of relief—you didn’t forget your keys, you did just update your home insurance, you did pay that bill—there’s always that moment when you shake your head and say, “how silly of me.”

I was always one of those people who was able to relax, sit back and laugh, no matter what was happening out there in the real world. Because bad things only ever happened to other people. My life hadn’t been stained by some unseen tragedy that I would need years of therapy to cure. There were no skeletons in my closet. And as someone who was unmarked by misfortune, I lived a fairly laidback life. Nothing ever really bothered me. I had great friends, an exciting boyfriend, my own car, my parents were happily married… life was grand.

This past summer, my boyfriend, Jeremy, and his best friend, Patrick, concocted an idea that was too good to pass up. They wanted the four of us—Patrick also happened to be dating my best friend, Lisa—to go out to Edinburgh for the Fringe Festival before school started. Patrick’s cousin Neil went there to study theater and was going to be in a production written by a local playwright for the festival, and since the family he was staying with had extra rooms in their house they said we could all go and stay with them for as long as we wanted. Sounds like a good deal, right? I thought so.

My parents had taken one of their many impromptu yacht trips at the end of July. Since school was going to start in a month, I decided that it was the best time for a last-minute summer adventure before my final year of university. I was in Sociology at Yale, getting really good grades and working really hard. Living at home and having my tuition paid for probably made that a little easier. I knew I was the 1% that wouldn’t have to slave away for the next fifteen years just to pay off school loans, and I was certainly grateful for it.

You see, we were sort of rich. And when I say rich, I’m going to go ahead and guess that we were somewhere in the neighborhood of Vanderbilt-rich. My dad owned a shipping company with his brother that operated out of the UK, and my mother inherited quite a bit when her father died, not to mention her occasional consulting and public speaking gigs. I was an only child, which meant the fortune would one day be mine, but I very humbly used my trust fund only for school, a few shopping sprees here or there and the occasional trip abroad. And the bmw I so lovingly called Babs was a gift from my uncle for my twenty-first birthday three years ago. Watching him try to figure out Skype when I wanted to call and thank him was both embarrassing and hilarious. He lived in Scotland, and my dad was here with us in Connecticut, but they were always on business trips together. My dad was the money man, had his iPhone and iPad with him wherever he went. He would often leave the room to take a call from his brother, who was in charge of operations, but clearly had no idea of how to operate modern-day electronics.

So, with every reason to go to Scotland written on a checklist and ready to read to my parents if they ever picked up their messages and called me back, I decided that hell freaking yeah I was going to Scotland.  END_OF_DOCUMENT_TOKEN_TO_BE_REPLACED